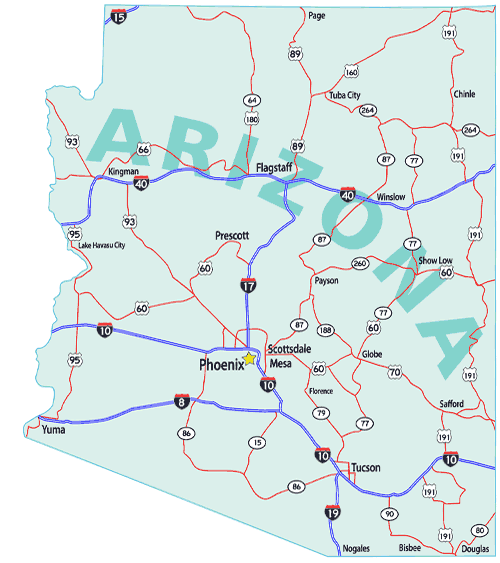 Interstate 10 through Arizona is a route for fentanyl traffickers moving the illicit drug from suppliers in Mexico into the hands of Arizonans consuming fentanyl laced with other illicit drugs, a deadly combination.

Here are just a few examples of fentanyl cases so far this year.

A trooper stopped a Chevrolet Cobalt on November 10 traveling eastbound on Interstate 10 in Casa Grande and found 30,000 fentanyl pills packaged in three bundles weighing 8.2 pounds. They have a street value of $400,000. Two occupants, Alan Aguilar and Manuel Carrillo Serrano, ages 25, were arrested on drug trafficking offenses and jailed on a $50,000 bond.

In El Mirage, just West of Phoenix, a couple purchased a Glo Worm toy for their child in February at a thrift store and when they began cleaning it, they found 5,000 fentanyl pills and notified authorities.

The Arizona Department of Public Safety (DPS) has kept a significant focus on removing fentanyl filtered into Arizona. DPS so far in 2021 have seized about 385 pounds of fentanyl, said the agency’s director, Col Heston Silbert, on KTAR News.

Pima County Health Department reported 409 opioid overdoses so far this year, of which more than half were fentanyl related. Synthetic opioid is the leading cause of death among Pima County teenagers.

The Federal Drug Administration says fentanyl is 80 to 100 times more potent than morphine. Other opioids are laced in fentanyl, a drug developed to ease pain in cancer patients.

Deadly laced fentanyl is a raging public health crisis. Arizona deaths caused by opioids in 2020 increased 45 percent from the previous year. Fentanyl is easy to manufacturer, is extremely potent, and its various forms are easy to smuggle.

Fentanyl has been found in other drugs so drug users have no idea what they are taking. To combat this Governor Ducey, in May 2021 from his Phoenix office, signed into law a provision to remove fentanyl testing products from Arizona’s list of illegal drug paraphernalia, which now allows drug users to identify drugs that have been laced with fentanyl.

Those selling or trafficking the drug open themselves to a Class 2 felony carrying long prison sentences if convicted and a drastically altered life after release from prison.

Arizona Revised Statute 13-3408 forbids people to possess, use, administer to another person, acquire, sell, and transport or offer to transport illicit drugs including fentanyl, as well as possessing equipment and chemicals for manufacturing illicit drugs.

Possessing over “threshold” amounts of illicit drugs is determined by weight, market value, or other form of measurement as outlined in ARS 13-3401(36)...

36. “Threshold amount” means a weight, market value or other form of measurement of an unlawful substance as follows:

(b) Nine grams of cocaine.

(f) Nine grams of amphetamine, including amphetamine in liquid suspension.

(i) For any combination consisting solely of those unlawful substances listed in subdivisions (a) through (h) of this paragraph, an amount equal to or in excess of the threshold amount, as determined by the application of § 13–3420 .

*Also, any narcotic not listed above having a market value over $1000 is considered over threshold. Fentanyl is a narcotic drug.

Any of these criteria leads law enforcement to presume the defendant was engaged in manufacturing, transporting, selling, transferring or offering to do any of these activities. Scales, packaging materials and other evidence does not need to be discovered to make the charges.

Those who are arrested for threshold amounts will be charged with a Class 2 felony, the second most serious crime in the felony range. Repeat drug threshold offenders will face longer prison sentences.

Possessing equipment for making dangerous drugs is a Class 3 felony with lesser but still significant penalties.


Sentences for over threshold fentanyl offenses

Arizona has strict punishments for fentanyl offenses under the state’s sentencing guidelines, which have ranges of minimum, presumptive, maximum, and aggravated. Transporting for sale, over the threshold amount, is a serious offense. If convicted, a prison sentence is mandatory.
For a first time felony conviction for transporting fentanyl over the threshold amount, is a mandatory prison sentences of:
Class 2 felony: 2 to 12.5 years in prison.

Felons are forbidden to own or possess a firearm and disobeying that restriction means going back to prison. Felons cannot vote in elections, hold public office, enlist in the military or serve on a jury. Employers can refuse to hire felons, landlords can deny them a place to live to protect their renters, and felons may lose public housing.

They cannot obtain a commercial driver’s license or hold a certificate for various professions or occupations. Felons who were receiving education grants and loans may be barred from obtaining further assistance and denied food stamps and workers’ compensation.

The felony conviction remains on the offender’s public record for 99 years.

Every case has a unique fact pattern that is paramount in establishing a defense. The law allows avenues to ward off a felony conviction with these common defenses:

It is clear that this offense is extremely serious. If you or a loved one are arrested or under investigation for a fentanyl offense, it is best to have legal representation immediately.

The prosecution must prove its case beyond a reasonable doubt, so establishing doubt in the minds of a juror is the defense’s goal. Hiring a criminal defense attorney who is experienced in defending fentanyl cases, such as myself, is crucial for your freedom.

I will conduct an independent probe of the state’s evidence and law enforcement procedures hunting for errors or misconduct.

Should the prosecution have a strong case against you, it may be possible to negotiate a plea agreement to a less serious charge in return for a guilty plea.

In using me for your defense, you will receive aggressive representation and personalized service. You will always be talking to me, never an assistant. Start your defense by calling Aaron M. Black Law at 480-729-1683 or use my online contact form. I will respond quickly unless I am in court or at trial.

I defend drug trafficking fentanyl cases in federal, state, municipal, and justice courts in and adjacent to Maricopa County.

He worked on my case the day I met him and had the charges dropped down before my court date.